In Omaha, where we live, there's a park that sits on the Northeastern edge of town called Hummel Park. Now, I've talked about Hummel Park before as I've hiked there several times. It's a beautiful place to hike as it's surrounded by forest and filled with hills, a creek, and plenty of interesting foliage. It's also a popular frolf course, which is always evident by the number of people I see there playing it on any given day.

Hummel Park is also well-known for a third thing: the paranormal. There are so many legends surrounding Hummel Park, and it's been investigated by the local paranormal group, as well as others. I myself tried to investigate it one night with my son, but it's also known for a fourth thing--a place for people to get up to no-good - so we gave up trying to investigate it.

It's been rumored that lynchings occurred here in the early 1900s by racists. It's the purported site of many suicides. It's believed that a prostitute was assaulted and murdered by other prostitutes here. A story that's perpetuated throughout time is about an early settler to the area was murdered by his wife at their home next to the park. While none of the rumors have any real evidence to back them up, the murders of the prostitute and the early settler - among others - have been substantiated.

One of the more interesting, yet benign, tales I had heard of was that of the Morphing Stairs. Located at the topmost area of the park, these stairs were built during the Depression Era. Legend says that you can count these stairs as you go and you will get a different number whether you're going up or down. I always found this intriguing but had never actually sought out the stairs to test the legend for myself.

This last weekend, my folks were here from out-of-town for a visit. Saturday was a gorgeous day, so I took them up to Hummel Park, before they left town, for a leisurely hike. Since Hummel Park is located on their way out of town, we parted ways after the hike. Being that it was so nice outside, I decided the rest of us should go into the main entrance of the park and enjoy the beautiful drive through its winding roads. My husband suggested we find the Morphing Stairs, and my face lit up. Of course!

We made our way to the top of the park where there's a shelter house, a playground, and several trails for hiking located in any direction. There's a beautiful view to the East, while the shelter sits to the West. I figured the stairs were probably past the shelter house, and so we set off on foot to find them. Indeed, we found them a ways past the shelter, between two foot trails. 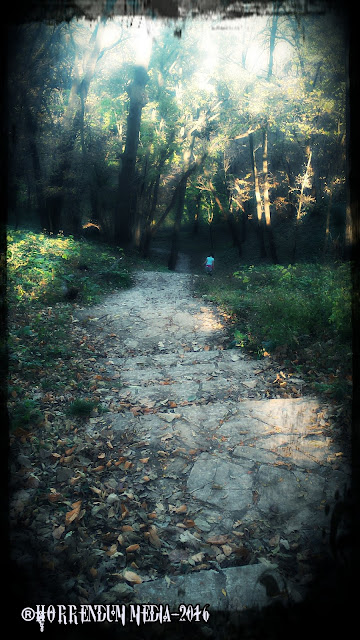 A view from the top of the stairs, looking down. 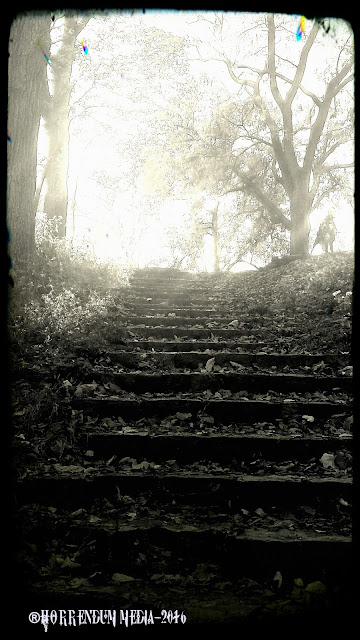 A view of the stairs as you're looking up.

We decided to test the theory by counting the stairs going down and coming back up. We got a different count each time. I don't think that's necessarily from any paranormal reasons, but rather natural ones. The stairs are old and degraded in several areas, and I think this can keep you from getting an accurate count. Still, climbing up and down them twice, you would think we would have gotten the number the same at least one time.

We weren't the only ones there testing this out. A young girl and two young gentlemen were also climbing up the stairs when we arrived, and they were counting out-loud. They then climbed back down, back up, and back down again. I have no idea how long they might have been doing this before we got there, but they were obviously coming up with the same results as ourselves: inconclusive. As we were leaving, three young gentlemen were arriving and told us that the stairs were haunted. I chuckled and told them we had counted them.

The stairs may or may not be morphing (or haunted), but it sure is interesting how the legend seems to be true...at least for some of us. If you ever get a chance, and you're in Omaha, go test it out for yourselves one day. You'll get a workout if nothing else.
Labels: Ghosts & the Paranormal