Final Teaser from "The Station" 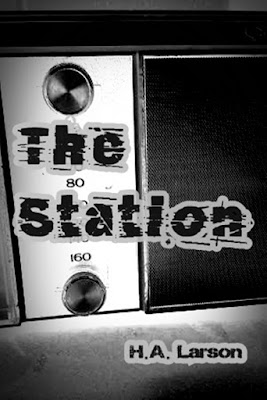 Hey everyone! I'm pleased to announce that my third book, "The Station", will be released in time for Halloween! Since I released my first book on Halloween of last year, this is an amazing milestone for me. I figured it was time for a third (in honor of my third book), and final, teaser from the book. Are you ready? Enjoy!

Eric’s eyes fluttered open. The sun was shining weakly on his face. He was very cold and lying in the dirt. Disoriented, he began to sit up, but was overcome with a headache that felt like it was going to rip his skull apart. He gingerly touched the back of his head, and felt the patch of blood that had coagulated there. A ringing in his ears added insult to injury, and when he went to touch them he felt more dried blood.
He struggled to stand up as he remembered the incident from last night and how he ended up in his current predicament. From the way the light streamed down in a gray haze, he realized dawn was just beginning to break. Considering the time of year that it was, it couldn’t be any later than 7:30 a.m. When he was finally upright, he staggered as he walked, and used the trees around him to keep from falling down.
His head was throbbing and his gait was uneasy, but he still managed to find his way out of the woods and onto the familiar path to the cabin. Daylight, gray as it was, was completely upon him as he stopped in front of the deck steps to rest. He willed himself the rest of the way into house and made sure to lock the screen door behind him.
He swayed along the hallway to the master bedroom where he drew a bath, undressed, and climbed in. He closed his eyes and fell asleep as the warm water soothed his aching body. When he opened his eyes again, the water was frigid. His body wasn’t as sore as it was when he first got in the tub but he was freezing so he leaned over to pull the plug. Covered in goose bumps, he stood up and turned on the shower as hot as he could stand. The water rained down over him, taking the chills away along with the pain.
Clean, and in better shape than when he had first returned, he rooted around in the medicine cabinet for some pain reliever. He swallowed down four with a glass of water, and then retired to the comfy couch. He went over in his mind the events from the night before and tried to figure out exactly what had happened. He must have been so entranced in fear by the woman from his nightmares, that he hadn’t heard a large limb, or maybe a tree itself, as it came crashing down on the back of his head.
He tried to convince himself, but he didn’t recall having to move a tree nor a large limb in order to get up off the forest floor. Then he reminded himself that the whatever it was could have rolled off a few feet in any direction away from him. Maybe he hallucinated the whole thing, but he didn’t think so. Confused, but unsure of what he should do, he decided to watch an old movie and put it out of his mind.
The movie couldn’t hold his attention and his thoughts kept returning to all the odd happenings that had occurred since he had returned to his hometown. Something was going on, and disparaging thoughts of captive women in the woods seized control of his mind.

Excerpt from "The Station" 2015. All rights belong to the author, H.A. Larson, and any use is strictly prohibited.
Labels: Books & Music & Movies The Author