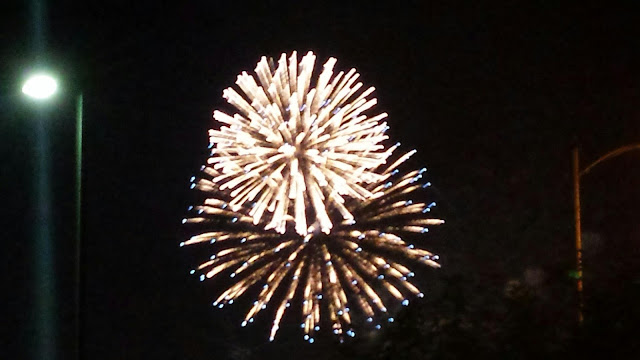 My best, but still blurry, photo from the Ralston fireworks Saturday night.

It's Monday, and I hope everyone had a wonderful, safe, and fun holiday weekend. One of my closet friends came over with her daughter, and we grilled a mixture of vegan & carnivore foods. For my end, I made carrot hot dogs, corn on the cob, and Maple-Mustard roasted veggies. This last item was a recipe I got from Isa Moskowicz's 10th Anniversary edition of Vegan with a Vengeance. The recipe called for potatoes and green beans, but I didn't have green beans. I did have a head of cauliflower that absolutely needed to be used, so I subbed it for the green beans, and it came out amazing.

Later, after we had eaten, but before we consumed too many adult beverages, we headed down the road a few miles to a suburb to check out their fireworks display. We have gone to this particular town's fireworks for the last several years, and they never disappoint. I do have to say, that the amount of personal fireworks that people own has really grown! We saw so many fireworks before the BIG fireworks, that it was like having twice the show for the price of one.

Anyway, that was my 4th! Have a fantastic week!